Leave a comment
Artsy Fartsy, Fish in the face, like Merping on a fluffy solid fictional cloud

If I never see another fish it’ll be too soon

So my show was a few weeks ago now, so my hatred of fish is waning but still burning pretty well
I finally “finished” my paper mache fish, by which I got them completed but not perfected.  they still have a bunch of problems: namely the tails which I practically forgot and didn’t get to spend too much time on making the way I wanted to look. 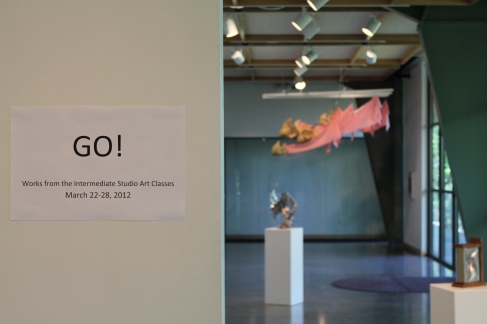 If you were curious how they turned out, here’s some pictures! only took me way too long. 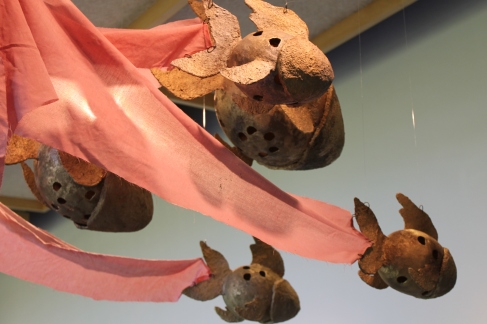 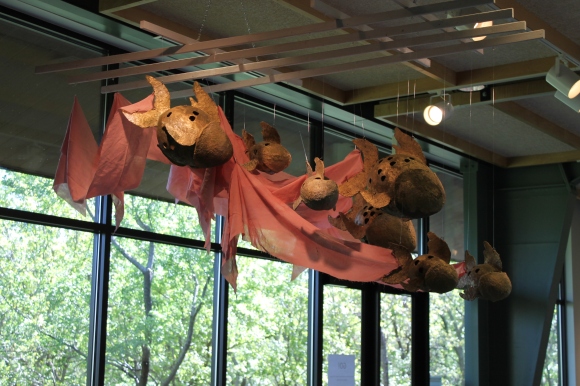 As you can see I had to construct a trellis for them to hang from and it was a little last minute stressful.  I also failed to realize the difficulty with hanging pieces and how nice it would be to have hooks on pre-measured string for hanging them. yeah, learning experience. The fish line (oh the irony) showed up so much less in the gallery, which was awesome.  Something to think about when using fish line, the lighting. There’s also one little fishie who didn’t make it to the party since he’s still hanging up in the sculpture building. he would have helped get my idea across, as well as 10 more fish and a veiling I could drill into. It’d hard to tell from the pictures, but they have a minor V formation going too (like geese, which strikes my funny bone in ways to long to explain now)

My friends also showed in out tiny intermediate 1 week show (but they’re both painters, so we won’t judge them too hard c; )

It’s Midterms in just a two weeks now and I really can’t believe it.

It feels like just yesterday i met my new roommate Gabriella and I can still remember last semester so clearly.  I decided to try being a vegetarian this semester and I really can’t believe I’ve managed it without a hitch this long. The worst part of the fast semester though is as far as Art goes.  I only have 1 piece in sculpture! and it’s still not finished!
I’m still chugging away at those fish. I’ve got their masks and bodies lined up to be fin-ed but I wish I had double.  Not sure how it’ll turn out. 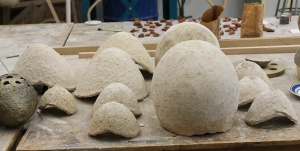 Then I’ve got to cut and colour them which shouldn’t be too hard except I plan on giving up the internet for Lent so I’ll have to watch something I have on DVD while I cut them.  Yeah, I’m not going to cut that many holes without something to distract my brain. 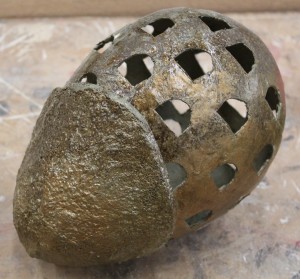 finally comes their tails which I’m still working on at least 5 different prototypes but I feel clothe will still be fastest.  Crochet might look cool but it’d take way too long.

Once I’m done with that I still have a my Junior review in front of everyone only a week or two into next month! YIKES! I better drudge up all my old pieces!
Time also flew as far as Printmaking goes, and frankly I’m ashamed of myself. After my Astronomy quiz tonight I need to go cut my paper and make all the registration marks so that I can start printing my green plate tomorrow.
I mixed up my ink yesterday and let me tell you  I went through hell getting it right.  The colour was fine but getting the transparency and then understanding that printing inks’ transparencies don’t work like photoshop threw me for a real loop.  urgh
Isn’t my green so pretty though? 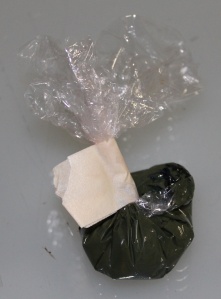 I’m starting with one of my simpler plates though and I’ll probably do my brown one last. I’ve always loved how the cuts look on the plate~ 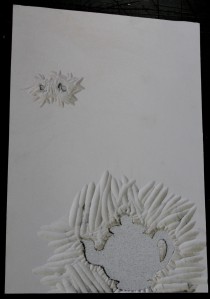 I’ve got the plans for my next two prints finished, which is good and they’re going to be a lot simpler.  I’ve got a etching in ancient egyptian hieroglyphs of a cat silhouette and some grains that I plan to have kinda messy looking with a combination of etching lines and woodblock flat colour sections.  I’ve still got to run them by the professor but they should fly.
So in that respect the semester has flown but it’s also stagnated in several respects.
Our garbage disposal has broken at least 3 times.  It feels like it’s been broken all semester.  The roach problem feels like it’s been an eternity.  My nightmares about the nasty little bugs from the first week feels like a million years ago. Astronomy feels like a never ending class with horrendous painful labs and too much math.  I guess I did to astronomy what non-art majors do to ceramics: underestimated it.  Only difference, Ceramics doesn’t make you do anything you’re not expecting.  Astronomy is a deceptive little booger.

Regardless, Midterms are coming. Tomorrow’s ash Wednesday and Lent’s beginning which means it’s almost Easter.  Last Easter feels like an eternity ago.  The Easter Before that is almost out of my mind! I think I finallly beat Final Fantasy XII two easters ago! I almost fainted in mass that year, I remember that much. Last easter I was human figure drawing class and-well.  Art supplies aren’t coming with my on break anymore.  just my sketchbook. (no, I didn’t bring naked people with me, if that thought crossed your mind.  It would have been epic to see people’s faces if I had done that)